This is from News Busters.

NB: There's a new American flag available on the Internet that has a picture of President Obama in the corner where the stars representing our fifty states normally reside.

Given how our media have assisted in selling Obama paraphernalia since Inauguration Day, one has to wonder what their position will be on the attractive keepsake pictured right.

As NewsBusters has chronicled, news outlets up until now haven't been shy about pushing product associated with the new president... (click here to read the whole post at Newsbusters.com)

Read the rest at Newsbusters.com. They have a good point. After all of the pandering, and lack of media criticism, why wouldn't they help BO sell out the American flag? He already made his own version of the Presidential Seal. Maybe that is what it will take to get him to show the Stars and Stripes any due respect. May it never be. As a vet, I must say that if this starts to get under way, we will not let it happen.

By the way, News Busters has become my favorite source of news lately. They show you the Left-wing bias in the media like I've never seen it before. They do an excellent job of pointing this stuff out, and deserve more than what ever they are getting.

Just what has he accomplished?

I can't take any credit for compiling the list, and I'm not familiar with Dark Matters Radio (which is where I found it). Having said that, this is awesome. If only the rest of America would wake up and smell the truth...

How does Obama define "hope" and "change?" Since he has been in office, he has already:

1. Offended the Queen of England.
2. Bowed to the King of Saudi Arabia.
3. Praised the Marxist Daniel Ortega.
4. Kissed Socialist Hugo Chavez on the cheek.
5. Endorsed the Socialist Evo Morales of Bolivia.
6. Sided with Hugo Chavez and Communist Fidel Castro against
Honduras.
7. Announced we would meet with Iranians with no
pre-conditions while they’re building their nuclear weapons.
8. Gave away billions to AIG also without pre-conditions.
9. Expanded the bailouts.
10. Insulted everyone who has ever loved a Special Olympian.
11. Doubled our national debt.
12. Announced the termination of our new missile defense system
the day after North Korea launched an ICBM.
13. Released information on U.S. intelligence gathering despite
urgings of his own CIA director and the prior four CIA directors.
14. Accepted without comment that five of his cabinet members
cheated on their taxes and two other nominees withdrew after they
couldn’t take the heat.
15. Appointed a Homeland Security Chief who identified military
veterans and abortion opponents as “dangers to the nation.”
16. Ordered that the word “terrorism” no longer be used and
instead refers to such acts as “man made disasters.”
17. Circled the globe to publicly apologize for America’s world
leadership.
18. Told the Mexican president that the violence in their
country was because of us.
19. Politicized the census by moving it into the White House
from the Department of Commerce.
20. Appointed as Attorney General the man who orchestrated the
forced removal and expulsion to Cuba of a 9-year-old whose mother died
trying to bring him to freedom in the United States.
21. Salutes as heroes three Navy SEALS who took down three
terrorists who threatened one American life and the next day announces
members of the Bush administration may stand trial for “torturing” three
9/11 terrorists by pouring water up their noses.
22. Low altitude photo shoot of Air Force One over New York
City that frightened thousands of New Yorkers.
23. Sent his National Defense Adviser to Europe to assure them
that the US will no longer treat Israel in a special manner and they
might be on their own with the Muslims.
24. Praised Jimmy Carter’s trip to Gaza where he sided with
terrorist Hamas against Israel.
25. Nationalized General Motors and Chrysler while turning
shareholder control over to the unions and freezing out retired
investors who owned their bonds. Committed unlimited taxpayer billions
in the process.
26. Passed a huge energy tax in the House that will make
American industry even less competitive while costing homeowners
thousands per year.
27. Announced nationalized health care “reform” that will strip
seniors of their Medicare, cut pay of physicians, increase taxes yet
another $1 trillion, and put everyone on rationed care with government
bureaucrats deciding who gets care and who doesn’t.

Bloomberg: Daschle says, “Health care reform will not be pain
free. Seniors should be more accepting of the conditions that come with
age instead of treating them,” while former Colorado Governor Dick Lamm
says seniors have “a duty to die.”
No comments:

Sukkot is Finally Here! ... And The Neighbors Think We Are Nuts. 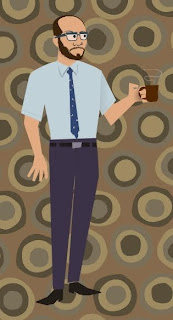 Sukkot is here, and I am pretty excited about it. I can't remember if this is our 4th or 5th year celebrating it, but each year I learn more about the significance of this prophetic moedim (click the link for a great essay on God's moedim by Tim Hegg).
I can't blog about the journey of a "Christian-gone-Messianic / Hebrew Roots" without mentioning the feeling you get when you build your first real sukkah.
It is an incredible experience knowing that God's people all over the world are building similar temporary dwellings. It is also a little awkward when you live in a small town, like we do.
There are no Jewish people living living here - at least I haven't seen any other Sukkah's in the neighborhood. I have to tell the neighbors that it's "only temporary."

I know that this is short, and not very informative, but I have to get ready for Sabbath dinner (which we will be eating outside), and there is a lot of work to do before the sun goes down.
Sukkkoth lasts for a whole week, so I will go into details of what it is and how we have grown in our observance of it. Keep checking back for more in depth coverage of "Sukkot 2009!" In the meantime, I will leave you with some pictures of our Sukkah...


Sabbath dinner will be eaten out here tonight 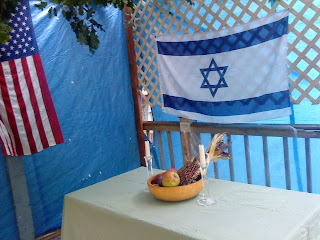 looking up through the branches 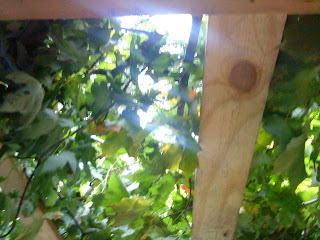 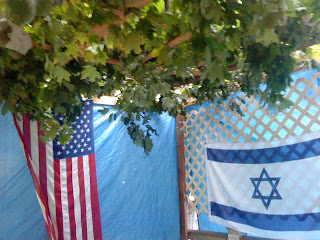 Our "front door" for the week! 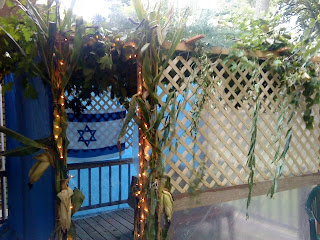