Jesus Was A Jew... And He Looked Like One Too

Ahhh. Here we are again.
Instead of getting on to things of global and spiritual importance, I think I am going to continue to rant for a while.
Topic of discussion: Facebook, or rather, the stupidity of Facebook and the comments seen on it.
Example? I got on there this morning, and the first thing I see is,
"Happy rabbit day everyone :D"
Now... don't ask me why, but this just about made me drive to the person's house, rip him out of bed, smack him across the face, and simply ask, "why?"
And there-in lies the problem with Facebook; everything under the sun - no matter how profound or mundane, is reduced to this menial, sappy, slapstick type of  talk that doesn't exist in the real world.
The Messiah, prophesied by men for nearly six thousand years was crucified on a tree. Dead for three days, pierced through the side, a Roman soldier's spear penetrating His heart - which released it's contents onto the ground. Taken down and placed in a tomb. Dead. Three days. The single greatest miracle of all time - without which, we would all be damned to eternity in Hell...  and all we can say about it in a public forum is,
"Happy rabbit day everyone :D."
I won't get into the theological stupidity of the rabbit symbolism, or how paganism that has taken over Christianity  right now - this is about Facebook. Do you get my point though?
Then we have the self proclaimed theologians who talk, and talk, and talk, and never say anything of any importance. These guys are the Fishers of Men's Arguments - because that's all that they are trying to do; fish for an argument. Useally it goes like this, "Did Jesus really mean that He was the ONLY way?"
I'm sure you've seen it before. The post is usually riddled with replies, or "likes" tags, from a bunch of folks who don't really care what Jesus meant at all. The question would be more honest if it asked, "What do we want it to mean when Jesus said He was the only way? How do we get out of that one without sounding like isolationists?"
...problem is, you don't get many thumbs-up on Facebook for honesty.
Recently I had an email message that said, "Jesus wants to be your friend" from the Facebook Team.
Guess what... that's not Jesus. I understand what he is trying to do, but is that really a good idea? Does Jesus really want him doing that? Isn't that what the bible is for; to get His Word to His people? Does He really need help? I doubt it.
...and the profile picture is of the blond hair, blue eyed Jesus. You know the one; the most historically incorrect depiction of our Messiah known to man. All he needs is a pair of glasses, and you have a picture of my neighbor; my 30 year old, white-guy, Budweiser drinking neighbor - not a Jewish rabbi.
Maybe we are more comfortable with a jesus who looks like George Harrison or Brad Pitt.

I actually saw a good representation of Him, here it is: ...and this one doesn't really have anything to do with the topic, it just cracks me up.

Bear with me here; I have been away for a while, so as soon as I can get some of this rage purged, I will get onto other topics of more importance.
That reminds me... tonight starts the final Sabbath of Pesach (Passover / Feast of Unleavened Bread), so I gotta go for now.

Democratic base, Obama has a message for ya.

WOW. Where has the time gone? We have a lot of catching up to do. So much has happened since I posted last...
First off, you all should know that Mango died. He lived to the ripe age of 12, and would have lived longer, but (you know Mango) his vibrant playfulness lead him to chase, and eat, a few rubber bands. At least that's what I think happened. He was totally healthy one day, then, BANG!! No more Mango. For the record, it wasn't very peaceful either - we had several trips to the vet - all after hours, and multiple shots; everything from hormones to vitamins, Mango had it. And they all failed. RIP old friend.
Next, it seams that the United States has completely lost our collective mind. For some reason, all of the Bush-hating liberal freaks have turned in their "Close Gitmo" hats for "Bomb Lybia" T-shirts! What a crock!
Let's get this straight; Bush was a "war criminal" for "torturing" prisoners of war. Because of the atrocities taking place at Guantanamo Bay, the Left said that the ONLY cure was to close it - and by God, they were going to elect the perfect liberal to get the job done. Only problem is that when Barack Hussein Obama gets his opportunity to put an end to it... he does nothing.
He does nothing, and the Left is totally quiet about it! It gets better though. Not only does he not close it, but he tells the world that it needs to stay open for business indefinately! Hey Democrats, remember this little jab? 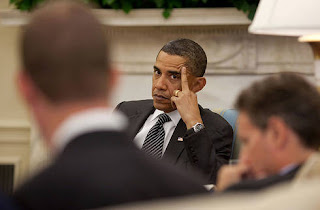 ...right back atcha.
Speaking of Bizarro-America, explain to me again why it is ok to go into Lybia and start bombing without Congressional approval, and only about 9 country's support at the UN? Didn't Bush have the supporting votes of Hillary Clinton, John Kerry, and every other bleeding heart Democrat in office at the time - full Congressional approval, and the backing of over 90 countries at the UN? Am I the only one who remembers that? Remember how Bush was again, committing war crimes? He was "goin' it alone" and all of that?
...isn't that a classic example of the pot calling the ket- oh yeah, that brings up another point - the media is telling us that it is "un-patriotic" to criticize the president now! Can you believe that? After all of the posters of Bush sporting that Hitler mustashe and the rhetoric telling us that "desention is the new patriotism" and all, I was under the impression that the media would be patting conservatives on the back for calling out the hipocracy of the current regime.
What's that? I'm sorry - I was under the impression that the term "regime" was ok now, after hearing it every other word form the pundits on the Left.
...but I digress...
Back to Lybia. All of you people who criticized Bush for "his wars," which he conducted illeagal...
your president has a message for you:

...remember, we need to keep the political rhetoric polite.
Let's see, what else has been happening? He's looking to put a kill-switch on the internet (like every other totalitarian dictator in the world), strangle  domestic energy production (like every other totalitarian dictator in the world), raise taxes, and limit America's economic growth. Hope and change.
I had every intention of getting back on Mangdiddles with a positive attitude - a new outlook on life and blogging. I really did, but dang! look around - the world is completely nuts. I will go to bed tonight  wondering how long it will take before I am put on a "list" of some sort for speaking out against the regime. Android is tracking my phone's location, and the liberals are spying on the Tea Party. Phone taps are all of the sudden legal, and no problem.
'Bush = Hitler" was witty and full of political candor, 4% unemployment was considered irresponsible and wreckless; the raising of the debt ceiling was a matter of National Security - a thing we aught not even consider. Man, those were the days. Back when the morons on the Left were fighting against problems that were in most cases nonexistant. Now, their own guy is doing the exact same things, to the Nth power - wiping his feet on the Constitution, and spitting on personal liberties, and what is their reaction? They worship him. They bury the negative stories, and rally the troops around his vacation spa to protect him.
In spite of all of this,
it's good to be back.