Did the Indianapolis Star train at AOL?

I rarely ever post entire entire news stories, but this one had to be shown in full. Anyone who knows me knows that I do not like AOL. I never have, and I never will. They spam us all with millions of spyware CDs, all of the trash they send out in the mail, all of the magazine fliers and so on. Even if you don't own a computer you get spam from AOL.
The AOL rep in this transcript reminds me of the people at the Indianapolis Star. They called me every day for about 4 months trying to get me to subscribe to their paper. I told them "No" every day - sometimes three times a day. Eventually, I started calling them first thing in the morning to let them know I didn't want their *#$@!* paper. They got the hint - until we moved to Waynetown. I got called four times in one day, and every day for the next week when we first moved here. Finally, I told the represenative that I was going to file charges against them for harassment if it didn't stop immediately. I got called the next day. I made the same threat, and was solicited again within an hour. I then spoke with a manager, made the same threat, and added that I would also take this to "Call 6 For Help", and every news agency in the tri-state area, and that they would be hearing from my lawyer if I received one more call.
We haven't been called back since.
----------------------
From NBC10.com in Philadelphia:

Eat up! There's plenty to go around.

I sent an essay in to a local news paper today because I heard that they were needing new writers. I stayed up until three in the morning writing it, and when I showed it to a member of the paper's staff, she said, "I think it looks great!"
Well, I sort of thought it looked good too, but the "Iop Execs" did not. Or at least I think they didn't. The reply I received said that I was welcome to go to news stories or sporting events and write "who, what, where" stories. 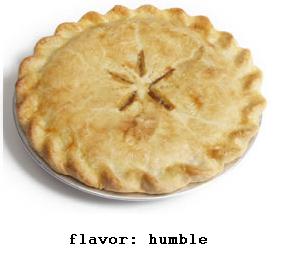 ...and I could expect to earn about 25 cents an hour, and all of the news print I can eat.

Here are some of the newest items that I have put up for sale on Ebay. I haven't had the time to make this site into a launching pad for my art work like I had planned, but this is a start.

This is a painting I did of the Exodus. I completed it in the late 90's, before Becca and I got married.
Click here to view on Ebay 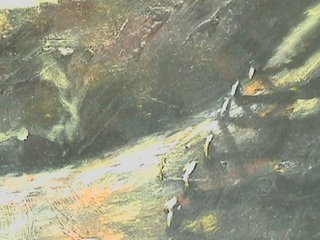 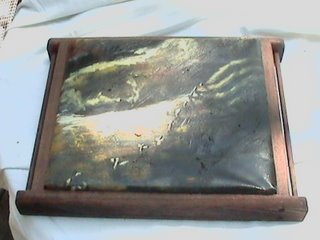 The next piece is a Purple Heart dish. The wood is a natural purple color - very pretty...
Click here to view on Ebay 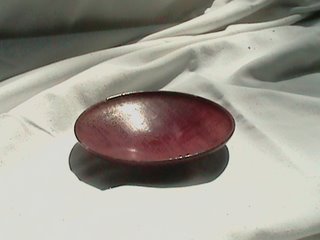 This is a Hickory bowl that I made a while back. 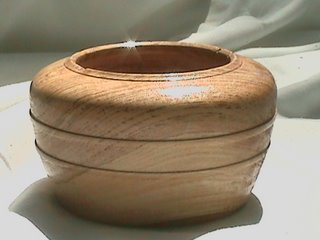 ...and another Hickory piece, this one with hgandles, and slightly larger. 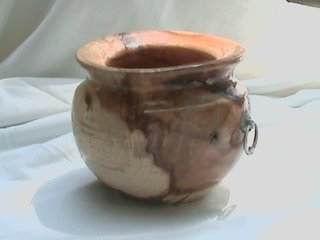 I am going to start selling art on here soon. I will be posting portraits that I have done, and wood and sculptures that can be bought by using the PayPal “donation button”.

Any and all feedback is welcome...

This is a pencil portrait that I did for my best friend's mother's best friend, who passed away a couple of years ago, after succumbing to Hodgkin’s disease. 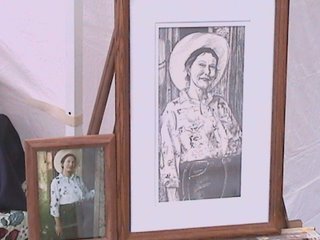 I have been waiting for this moment for a long time now - Mangdiddles received it's 1000th visitor this week!

Thank you to everybody that has stopped by. 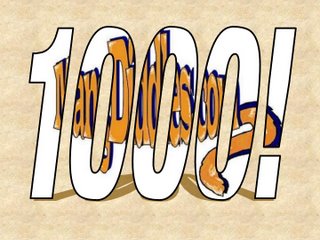 I had a conversation at the Strawberry Festival today with a friend (who is absolutely hilarious) about possibly making a short film based on my life - providing I haven't totally offended her with my site. I hope that I haven't, because I would really enjoy working on that..
She is currently working on a movie called the "Fantastic Zombie Hunters", which, knowing her, will be epic. I will keep you all, the viewing masses, updated on any progress.

In other news, I was pulled over tonight for going 62 in a 50. I got a warning ticked, which was good, but something odd happened. The police officer asked me what I had been doing this evening, so I told him that I had just come from the Strawberry Festival. He then told me that, though I "looked normal", he "smelled an odor", and asked me if I had any marajuana in the truck. It made me chuckle, and thank God that this wasn't 1997, so I offered him the opportunity to go through the vehicle if he felt inclined, but he didn't.
When I drove away, I couldn't help but wonder why he thought he smelled pot on me... until I remembered I had put patchouli oil on before leaving home this morning.

Sometimes, you can't win for losin'.

the cause of most intermittent explosive disorder

I have been getting ready for a festival this week, and have had to neglect Mangdiddles in order to meet my goals. Some news is just way too stupid to go un-blogged though.

The "cry for me" liberals of the left have a medical reason for losing their temper now. "Intermittent explosive disorder" is now a syndrome.

It is only a matter of time before they invent the "intermittent murder by intoxication disorder" to cover for the Kennedys, or the "sudden intern infedelity syndrome" for the Clintons, and the "permanent cerebral leave of absence disorder" for the entire Democratic Party.

How stupid do these people think we are? This "Intermittent explosive disorder" is nothing more than lack of self control - a trait that has epidomised the liberals from the beginning.

I have only been able to find one thing that causes this sort of behavior in conservatives, and that is the legitimization of fools... 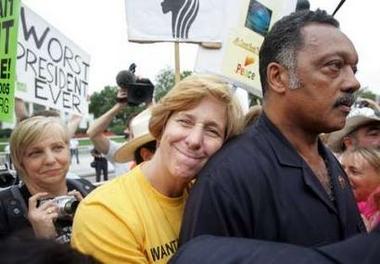 I should be posting regulalry by the time you have recovered.

As promised, I found some more pictures of "The Jimmy" with his 'friends'.
Man, what a guy. What a role model for the youth of today - the king of appeasement, the guru of political correctness...
ladies and gentlemen, I give you "The Jimmy"...


Disclaimer: The following photos have been altered to allow you to view “The Jimmy’s” line up of friends without having to actually lay eyes on one of the most detestable public figures of our time. "The Jimmy's" face has been replaced with a far more lovable figure from the 70's... 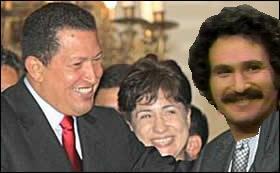 Giving a hardy thumbs-up with the leadeers of Hamas... 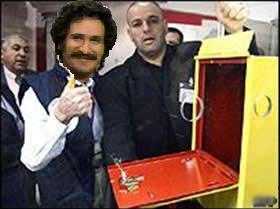 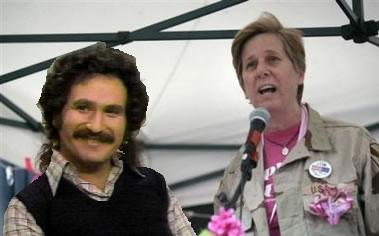 I can't help but wonder if Cafe Press will allow me to use these jems on T-shirts...

Seven people were shot to death "execution style" in a home near the Indianapolis Womens Prison last night.
-------------------------------------------
CNN: Police: 7 slain inside Indianapolis home
WTHR (Channel 13 News): Seven shot near Woodruff Place
--------------------------------------------
I can remember when this would have scared every one in the entire state to death. Any more though, it is just another bad headline that makes you shake your head, and shudder at what the world has become.
Let's see... how can we fix the problems in our cities? We already took prayer out of public schools, removed the Bible from the public eye, and any mention of Jesus Christ... what else can we do?
We teach multiculturalism, and "safe" sex. We glorify actors on television for murdering people in cold blood, and we allow murderers in "real life" to get off without stiff sentencing or the death penalty. We even tell our children that it is OK to be a homosexual, and that sexual perversion is "normal". These things were supposed to show that we were advancing, weren't they? What's happening then?
Maybe we should do more of these things, and everything will work its self out.
...then again, that would make us all Democratic Left Wing nut cases, wouldn't it?
No comments:

Update: Here is a link to the "CensureCarter" website if you want to buy bumper stickers and T-shirts. I do not receive anything for having this on - this is a direct link to their website, because I love and fully support what they are doing.

Sensor Jimmy Carter... Is it possible? Could it be?

Sensor Jimmy Carter.
If I had a dollar for every time my wife woke me up from nightmares that had me screaming those words...
Well, it looks like somebody is actually making an effort to do just that, and I am elated.
I can assure you that as soon as I can contact these people, I will have a permanent link to their website, so I can help in this noble fight against the largest mouth in all of politics. The website is called http://www.censurecarter.com/

I still refuse to stain the pages of Mangdiddles with “The Jimmy’s” photo, so here are some that have been touched up a little. Notice the great, America loving company that “The Jimmy” has made his closest companions.
For information about the site, or how you can help, here is their email: info@censurecarter.com
Disclaimer: The following photos have been altered to allow you to view “The Jimmy’s” line up of friends without having to actually lay eyes on one of the most detestable public figures of our time. "The Jimmy's" face has been replaced with a far more lovable figure from the 70's...
With Fidel Castro... 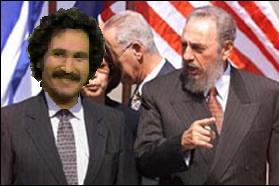 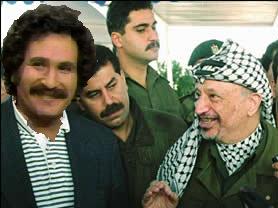 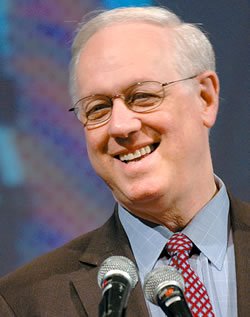 Introducing Sen. Charles Schumer at commencement exercises at New York City's Queens College, Hevesi began:
"The man who, how do I phrase this diplomatically, who will put a bullet between the president's eyes if he could get away with it. The toughest senator, the best representative. A great, great member of the Congress of the United States."
-----------------------------------------------------------
Let's see... what do you suppose the headline would be if say, a Republican were to call for the assasination of the Democrat's one true God, Bill Clinton, or their second deity of note, Jimmy Carter?
Why, there just might be a riot somewhere.
Thanks for bringing it to light, LGF.
No comments: