Russia, China, and a missinformed Bishop...

Russia and China are flexing their muscles
with a joint military exercise.
This is close on the heels of Russia's bickering about our missile defense shield in Czechoslovakia, so it isn't hard to do the math on their motives.

" The Pentagon said the Russian aircraft had not come close enough to U.S. ships to prompt American aircraft to react." 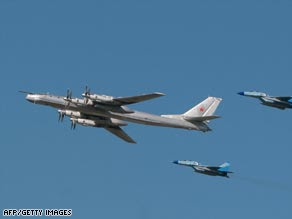 This is a prelude to the Russian invasion of Israel, written about in Ezekial 38.
Don't forget that Russia is the financier of the Iranian (Persian) nuclear facility.
They are setting the stage, and the world is snoring.

1 abortion every 3 minutes in America, and the media is in an outrage because this genuis "executed" dogs.
This is actually "breaking news" on CNN.com right now. Now, I am not for the cruelty of animals, and don't want to make light of it, but when did the life of a dog become more news-worthy than the death of millions of innocent American babies?

Notes from the most Excellent of Broadcasters, Mr Rush Limbaugh's "Rush in a Hurry" newsletter:

We're learning more and more about the Democrats' proposed expansion of the SCHIP program. Did you know that "children" up to the age of 25 would be covered under this if the Democrats get their way. Oh and illegals are covered too.
........
Battered Liberal Syndrome: Liberals are angry, as they keep voting for the same people and remain miserable. They continue to get sweet-talked and then clobbered over and over. Rush offers hope to those suffering with this affliction.

In an ironic twist, Chuck Missler has is advertising his "Feast of Israel" DVD in his newsletter. That is odd, considering he thinks that they are no longer necessary for the "church". I would encourage Chuck to read the last chapter of Zechariah. Why, you may ask? Because Zechariah 14: 16 states:
And it shall come to pass, [that] every one that is left of all the nations which came against Jerusalem shall even go up from year to year to worship the King, the LORD of hosts, and to keep the feast of tabernacles.
If God never changes, Chuck, why would this Feast be so important for God's people in the past, and be required when He comes back... and be irrelevant to us now?

Dutch Catholic Bishop Tiny Muskens has told his parishioners that Christians should begin calling God "Allah" in order to reduce tensions between religions.

The Bishop told a Dutch TV program Monday night he believes God doesn't mind what he is called, Radio Netherlands Worldwide reported. The Almighty is above such "discussion and bickering," he insisted.
...92 percent of the more than 4,000 people polled oppose the bishop's view, the Associated Press reported.

And they should. Allah is not the same God of the Hebrew scriptures; not even close. This guy needs to be reminded of all of the names of the God of Israel, and what He stands for - namely Israel itself.
Neither Allah or his followers want to let the Israelis live in their own land... or at all for that matter. It is time for Christians to wake up and smell the Islamic sword, and buck the Catholic trend of appeasing the Muslims and their demands.